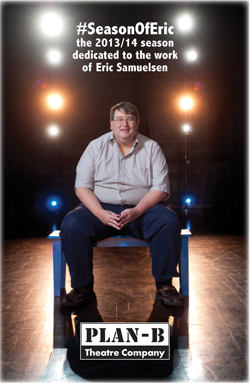 Eric Samuelsen has written for Plan-B Theatre Company for a decade where, in addition to the #SeasonOfEric, his plays MIASMA, AMERIGO and BORDERLANDS also received their world premieres.

It’s very rare for a fully professional American theatre company to devote time and resources to new work by local playwrights. It’s exponentially rarer for companies to do entire seasons devoted to the work of a single playwright. I expect, rarest of all, would be for companies to market that season using the playwright’s first name.

So: the Season of Eric. And I’m Eric; apparently sufficiently known (or at least notorious) to warrant not just a season of my work, but a marketing campaign based on my first name. It’s immensely flattering and a tremendous honor. Obviously, the greatest five events in my life were when I married Annette, and when each of our four children were born. I’m not kidding when I say this: The Season of Eric comes sixth. 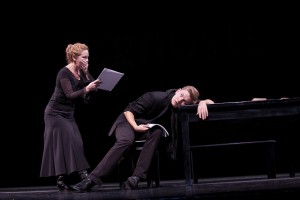 We started off with GHOSTS. My PhD dissertation was on Henrik Ibsen, most of my scholarly publications were on Ibsen; I’m an Ibsen guy. And I can say this unequivocally; I love GHOSTS. And of course the ending of the play is powerfully and movingly tragic. But I’ve seen GHOSTS in production many times, and I’ve always felt there was something essential missing. Humor. Dour old Ibsen, the stuffy Victorian moralist. As I translated the play, I kept cracking up; I loved Ibsen’s subversive satirical wit. In our Script-In-Hand Series production, we only had a few days to rehearse, but it was so thrilling to hear laughs in the house. As well as tears, of course, at the end. 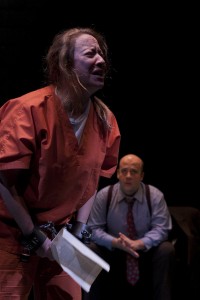 The first of my plays was NOTHING PERSONAL, a play in which I tried to capture the paranoia and rage of Kenneth Starr’s persecution of Susan McDougal, as well as the violent and violative ethos of the war on terror. Jerry Rapier, Plan-B’s Producing Director, had loved this play for years; I was worried about it. It’s edgy stuff for me; would it play? Thanks to a tremendous cast, and superb direction, it played brilliantly; so much so that it took me by surprise. I remember sitting in a dress rehearsal, completely taken by surprise, terrified for the brilliant April Fossen, as the brilliant Kirt Bateman tormented her with Dee-Dee Darby-Duffin looking on. That’s a weird feeling; to be shocked and appalled by something happening in a scene I wrote. Such is the power of live theatre, though.

Next up was the radio play FAIRYANA, billed as RADIO HOUR EPISODE 8: FAIRYANA. I wrote it as a play six or seven years ago, but it never felt right; never felt finished. And I’d never written for radio before, though I did work in radio many years ago. So in every sense, FAIRYANA was an experiment. Fortunately the wacky spectacle of savagely misanthropic and alcoholic people working as writers for a really sugary children’s television show proved funny, particularly given outstanding performances by Jason Tatom, Teresa Sanderson and Jay Perry under Cheryl Cluff’s direction. 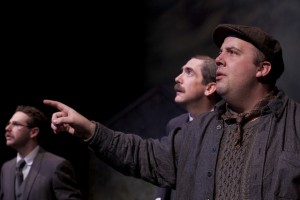 Most of my experience as a director has been in a college setting, directing mainstage shows with actors still learning their craft. When I was asked to direct my play CLEARING BOMBS, I was worried about working with accomplished, professional actors. What I learned was how joyful it is to work with actors like Jay Perry, Kirt Bateman and Mark Fossen. They responded so superbly to every direction. And they were adept enough to really communicate the hard-core macro-economics at the intellectual center of the play. 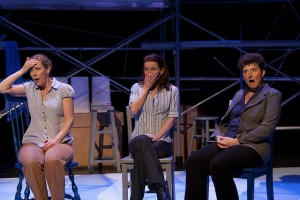 Finally, came 3. Two of the plays in the set were over ten years old, and I worried about their relevance to audiences today. But it was astonishing to see how current the plays felt. Issues of feminism and faith, of objectification and commodification and male gaze and empowerment and friendships wrecked by homophobia were playing themselves out daily in the press and on the internet. And again, I was so blessed with a superb director and cast: kudos to Cheryl Cluff, Teresa Sanderson, Christy Summerhays and Stephanie Howell!

So finally, thanks. Thanks to Jerry Rapier and Cheryl Cluff. Thanks to amazing actors and audiences and designers and stage management.

Click here for information on how to purchase (or get a free copy!) of Plan-B Theatre Company’s latest eBook, #SeasonOfEric, which includes all five of the plays above plus Matthew Ivan Bennett’s DIFFERENT=AMAZING.