Playwright Rachel Bublitz is an internationally produced playwright known for telling stories about women, and creating exciting new work for young performers. She received the prestigious Will Glickman Award for the best premiere play in the San Francisco Bay Area for RIPPED, produced at Z Space. She’s been commissioned by the Egyptian YouTheatre (CHEERLEADERS VS. ALIENS, THE NIGHT WITCHES and THE SUMMER I HOWLED) and PlayGround (MOMMY DANCES WITH THE DEVIL). BURST was selected for MACH 33, a festival of new science plays at the Pasadena Playhouse. She’s been published by Dramatic Publishing, YouthPLAYS, Stage Partners, and Pioneer Drama Service, where she won the Shubert Fendrich Memorial Playwriting Contest. She returns to Plan-B, where she previously contributed the monologues “Red” and “Blue” to (IN)DIVISIBLE and the short play “The Final Debate” to ROSE EXPOSED: BREAKING NEWS. RachelBublitz.com

Actor Talia Heiss (Ray to Melissa Salguero’s Cass) is ecstatic to make her Plan-B debut with PRESENTING: SUPER CAT & REPTILE ROBOT. Her credits include COCAINE TRIPTYCH (Open Door Productions at the Great Salt Lake Fringe Festival), AVENUE Q (Midvale Main Street Theatre), CABARET (Salt Lake Community College) and DRACULA and BRING IT ON: THE MUSICAL at the University of Utah, where she is currently a senior in the Musical Theatre Program and will next be seen in Rachel Bublitz’s THE NIGHT WITCHES. 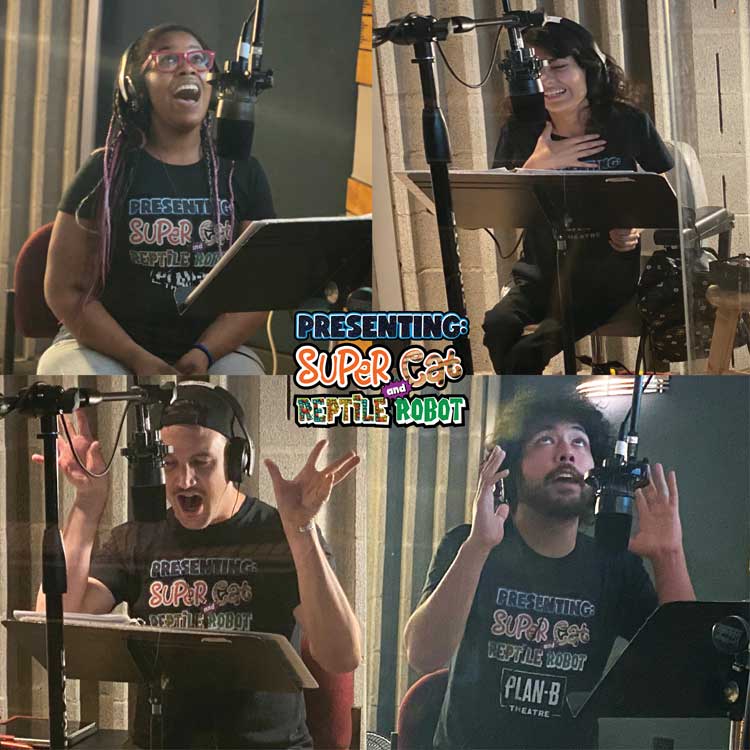 Sound Designer Cheryl Ann Cluff co-founded Plan-B in 1991, has served as Managing Director since 1995, and has designed sound for nearly every Plan-B production since 2000. She has directed all 14 episodes of RADIO HOUR and the Free Elementary School Tours of Melissa Leilani Larson’s THE EDIBLE COMPLEX, Elaine Jarvik’s RIVER.SWAMP.CAVE.MOUNTAIN. and Jenny Kokai’s and Oliver Kokai-Means’s ZOMBIE THOUGHTS. Most recently she designed sound for Jenifer Nii’s THE AUDACITY.

Education Coordinator Sharah Meservy has been Plan-B’s Education Coordinator since 2017. She has taught English in China and theatre for Bad Dog Arts. She has worked as an elementary school paraprofessional, a Girl Scout camp counselor, a drama mentor for K-12 teachers for Utah Festival Opera & Musical Theatre and as the Education Tour Manager for Grassroots Shakespeare. Sharah is currently pursuing her Master’s in Public Administration at the University of Utah.

Director Jerry Rapier has served as Plan-B’s Artistic Director since 2000 and has directed more than 30 productions for the company, including five that have enjoyed extended lives in New York, two that have been nominated for the Pulitzer Prize in Drama and three previous Free Elementary School Tours. He has developed new work at Salt Lake Acting Company, Pioneer Theatre Company and Utah Shakespeare Festival and directed TYA plays for YouthTheatre at the University of Utah and Egyptian Theatre. He is a recipient of Salt Lake City’s Mayor’s Artist Award in the Performing Arts. His son Oscar is incredibly proud that he is seven and has lost seven teeth.

Coloring Sheets Designer Katherine Jelte graduated from the University of Utah with a BFA in Theatre and a BA in Film. She is currently living in L.A., working on her Master’s at UCLA. Recent theatre and film credits include design work for SHE KILLS MONSTERS (Kingsbury Hall), BIG LOVE, and THE RIVALS (Babcock Theatre); production design for the short film Salty Plastic (Avant Garden Films) and scenic painting for Bar Rescue (Paramount Network).