SHERLOCK HOLMES AND THE BLUE CARBUNCLE

presented in partnership with KUER’s RadioWest

After six episodes (2005-2010) and a year off, Plan-B’s RADIO HOUR partnership with KUER’s RadioWest returns with EPISODE 7: SHERLOCK HOLMES AND THE BLUE CARBUNCLE.

Holmes & Watson must discover how the Countess of Morcar’s stolen jewel came to be inside a Christmas goose. The mystery begins with a street fight and ends with a full confession. Join this wild goose chase of a holiday whodunit, performed as radio drama with you as the live studio audience!  A holiday treat for the whole family (ages 8+) and undoubtedly the most unique family entertainment of the holiday season!

Featuring Bill Allred as Watson, Doug Fabrizio as Holmes, with Jay Perry and Jason Tatom as everyone else.  Foley by Mark & Eric Robinette.  Directed by Cheryl Ann Cluff.

PODCASTClick here and then click “Listen” in the center to stream or “Podcast” on the right to download to iTunes.

Cheryl Ann Cluff co-founded Plan-B in 1991 and is the company’s Managing Director.  She has directed all of Plan-B’s RADIO HOURs as well as MESA VERDE and THE SCARLET LETTER.  She has also designed sound for nearly every Plan-B production since 2000, most recently BORDERLANDS, LADY MACBETH and THE THIRD CROSSING.  She also adapted Edgar Allan Poe’s short stories “Buried Alive” and “The Tell-Tale Heart” into RADIO POE, the first RADIO HOUR in 2005.

Bill Allred (Dr. Watson) jas hosted several of Plan-B’s AND THE BANNED PLAYED ON events (a couple of times with Doug Fabrizio).  He has also appeared in Plan-B’s RADIO HOUR: ALICE and the Script-In-Hand Series reading of STANDING ON CEREMONY: THE GAY MARRIAGE PLAYS and 8.  Bill is best known as the co-host of X96’s Radio From Hell.

Doug Fabrizio (Sherlock Holmes) has hosted several of Plan-B’s AND THE BANNED PLAYED ON events (a couple of times with Bill Allred).  He has also appeared in Plan-B’s RADIO HOUR: ZERO HOUR & THE HITCHHIKER, RADIO HOUR: LAVENDER & EXILE and RADIO HOUR: FRANKENSTEIN as well as the Script-In-Hand Series readings of THE NORMAL HEART and STANDING ON CEREMONY: THE GAY MARRIAGE PLAYS.  Doug is best known as the host/executive producer of KUER’s RadioWest.

Jay Perry (Everyone Else Not Played By Jason Tatom) had appeared in Plan-B’s RADIO HOUR (all 7!), LADY MACBETH, SHE WAS MY BROTHER, two runs of GUTENBERG! THE MUSICAL!, four runs of FACING EAST (including San Francisco and New York), THE ALLENATION EFFEKT, TRAGEDY: A TRAGEDY, several SLAMs the Script-In-Hand Series readings of THE NORMAL HEART, A DOLL HOUSE, STANDING ON CEREMONY: THE GAY MARRIAGE PLAYS and 8 and is currently touring elementary schools with PETER AND THE WOLF.  He will appear in Matt Bennett’s A NIGHT WITH THE FAMILY at Pygmalion Theatre Company this spring.

Jason Tatom (Everyone Else Not Played By Jay Perry) has appeared in Plan-B’s EXPOSED, LADY MACBETH, several SLAMs and the Script-In-Hand Series reading of 8.  He has always been a fan of radio, his childhood favorites being Jack Benny, Abbot & Costello and anything from The Mercury Theatre, so saying he’s excited to be in his first RADIO HOUR is an understatement.  His regional credits include Pioneer Theatre Company, Salt Lake Acting Company and the Denver Center Theatre Company.  Proud graduate, National Theatre Conservatory. 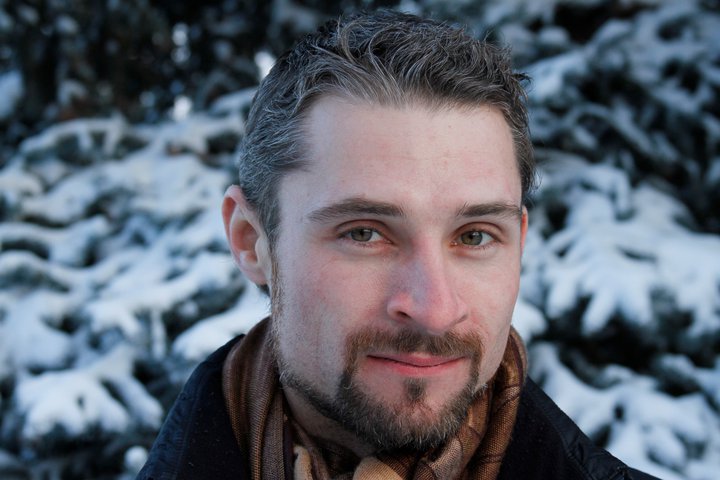 Like a lot of kids, I was introduced to radio theatre on family trips. My parents liked to tune into AM radio on long drives and from the back of the station wagon I heard sketch comedy like Nichols and May. Once, on the last day of school in the seventh grade, I think, our administration played Abbot and Costello’s WHO’S ON FIRST? over the PA system and I became obsessed with the sketch. My dad, it turned out, had it on cassette tape (along with THE SHADOW) and at one time I had a long chunk of it memorized. My cousin Nate and I even recorded our own radio shows using a little gray boom box. I vividly remember recording myself one morning after a sleepover saying, “I slept with my socks on last night!” and then laughing hysterically. That was my younger self’s version of a joke. My cousin and I listened to that “joke” over and over.

When I was in high school drama, I thought, “I want to be a radio actor.” I told my teacher Russ Johnson and he kindly informed me that there weren’t many radio actors anymore. I was a weird mixture of insecure and confident as a teenaged theatre person: I could act with my voice, but not the rest of my body. So I wanted to do radio. Once I got into college, though, my insecurities relaxed and I forgot about radio for a while – until I heard my first Plan-B Radio Hour in 2005 (RADIO HOUR: POE adapted by Cheryl Cluff) on KUER!  I wanted to be a part of it instantly and soon got a chance by adapting Utah ghost stories for the radio in 2007.

I never read Sherlock Holmes until a year or so after high school. I began with the SIGN OF FOUR and then devoured everything. I saw television versions of the Holmes character when I was kid, and grew up well aware of the archetype of Holmes, but I don’t think I would’ve appreciated the stories themselves until I was 20. I love Holmes, and the stories, because I value logic a lot in my life. I work in a profession where intellectualism can really interfere with your work, but throughout my life I’ve gravitated toward a view that analysis and logic are entirely different. The (analytical) part of our mind that’s always parsing, always chopping up words and experiences, that part, I think, is an inborn neurological feature. Logic, however, is a difficult and rare mental path whereby you commit yourself to thinking in a way that’s complete, consistent, to-the-point and as accurate as possible. Humans are innately capable of logic, but it’s still a *learned* ability – you have to work hard at it.

Holmes doesn’t entirely rely on logic; he does follow (informed) hunches – but without his commitment to observation and a brand of thinking that’s complete, carefully consistent, etc., he wouldn’t be able to do what he does. He’s a hero to me in that he shows how simple observation and reasoning can unwind our toughest problems. Well, I can’t reason as well as Holmes, but reading the stories I feel like I can. Sir Arthur Conan Doyle did seriously inspire me to investigate logic and learn the common pitfalls of human thought.

What grabs me about THE BLUE CARBUNCLE is that it’s a tale of forgiveness. Holmes lets the criminal go! It’s less black-and-white than many of the stories because the criminal isn’t clearly a bad man, just a regular guy who’s tempted by the possibility of instant great wealth.