As they embark on the most wonderful/awesome/amazing sleepover in recorded history, nearly-ten-year-old Cass (aka Super Cat) and ten-year-old Ray (aka Reptile Robot) grapple with who gets to call the shots and how to tell someone tickling just isn‘t your thing.

An interactive tale of boundaries and superheroes.
With a magic remote.
And s’mores. 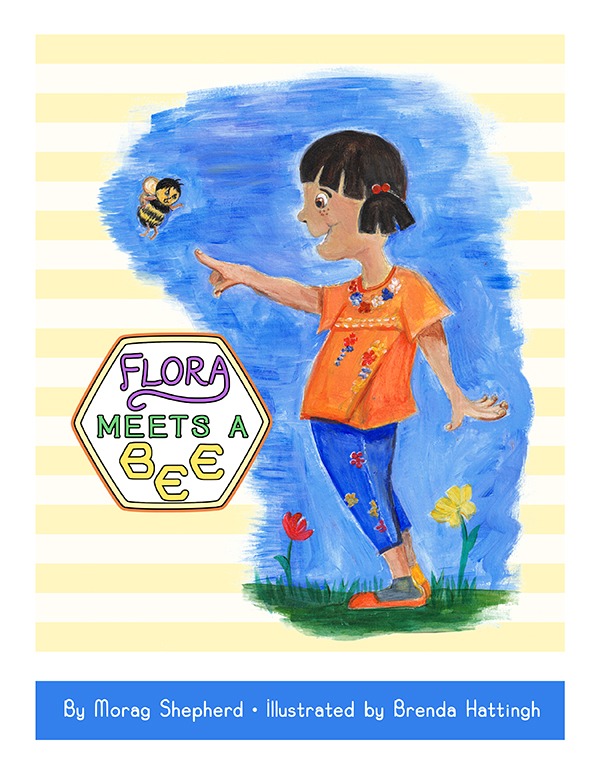 FLORA MEETS A BEE by Morag Shepherd. Eight-year-old Flora has lived in six foster homes since the age of five. One day Flora meets Bee and their budding friendship changes everything. Bee understands Flora no matter what language she speaks or how much she avoids sharing her true feelings. Flora sees the kindness just below the surface of Bee’s rough, worker-bee exterior that most people may not take the time to see. For grades K-3. Core Standards in reading, writing, science, social studies, and human development.

Click here to download the FLORA MEETS A BEE picture book (be sure to the read-aloud video featuring both casts directly below; scroll further down for performance videos), created when the Free Elementary School Tour was cut short due to Covid-19.

Click here to visit Salt Lake City Public Library’s BiblioBoard to watch the full performances of both casts of FLORA MEETS A BEE, as well as these additional Free Elementary School Tours (accompanied by study guides):

ZOMBIE THOUGHTS by Jenny Kokai & Oliver Kokai-Means (2018/19) is the story of Sam and Pig, avatars in a video game. Sam is anxious. Pig is punny. Will the audience be able to help them make the right choices on their quest to defeat the evil Machine? A sometimes touching, sometimes hilarious journey in, around and through anxiety. For grades 4-6: Core Standards in mental and emotional health, reading, and writing.

RIVER.SWAMP.CAVE.MOUNTAIN. by Elaine Jarvik (2017/18) is the story of five-year-old JJ (who has lots of questions) and eight-year-old Izzy (a know-it-all who doesn’t know it all), siblings who have recently lost their grandmother. They embark on a funny and touching hero’s journey to try to make sense of loss, grief, death and life. For grades K-3. Core Standards in mental and emotional health, reading, writing, and social studies.

THE EDIBLE COMPLEX by Melissa Leilani Larson (2016/17)  is a comedy about ten-year-old Anna, who dreams of being a chef. She is also becoming aware of how her body is different from others at school. So, one day she decides to stop eating, but it’s hard to ignore your Food when it starts talking to you! For grades 4-6. Core Standards in mental and emotional health, nutrition, and human development.

RUFF! by Jenifer Nii (2015/16) is a metaphorical “tail” of two shelter dogs. Axel (a shelter regular played by Tyson Baker) and Buddy (a shelter novice played by Latoya Rhodes). Together they discover what’s possible when dogs and their people learn to see past stereotypes and summon the courage to be the best they can be. For grades K-3. Core Standards in social studies, science, healthy foundations, reading, and writing.

DIFFERENT=AMAZING by Matthew Ivan Bennett (Spring and Fall 2014) is drawn from real-life bullying experiences of elementary students, including students from Salt Lake City and Davis School Districts. The goal is to provide students with the tools to identify, address and hopefully prevent bullying in their own schools. For grades 4-6. Core Standards in language arts and health education.

In the Classroom, grades K-6: Playwriting With Young People Click here for “Playwriting With Young People: The Essentials” by Julie Jensen, illustrated by Andrew Livingston, where you will find the 16-page curriculum in English and Spanish (pdf and audio files), videos for classroom use, pacing guides, lesson plans and worksheets, along with videos for students to use at home (in English and Spanish).

These activities will help K-6 students meet the Core Ctandards in Drama (create, perform/present/produce, respond and connect) and may easily be adapted to support any other subject or class project.

In the Classroom, grades 6-12: Radio Slam

Creating your own radio drama is an effective, innovative, isolation-friendly and boredom-fighting way to approach and explore any subject or element of the Core. Although we have been creating radio drama for 25 years, we’ve never done so in isolation. Until now.

In response to Covid-19, four Utah playwrights began writing 10-minute radio plays on April 16, 2020. Then, on April 24, four creative teams were randomly created. Each team had access to the expertise of the creative team that’s been creating radio drama together for over a decade (Matthew Ivan Bennett, Cheryl Ann Cluff, David Evanoff, Jay Perry) and rehearsed virtually, recording all of the components in isolation by April 29, and then editing and finalizing their piece with a sound engineer on April 30 and May 1. The four pieces premiered as RADIO SLAM from May 5-8, 2020 on KUAA-FM and our free app.

Elaine Jarvik’s MY EYES ARE CLOSED SO PLEASE DON’T TEXT ME
Syd is stranded 100 (or possibly 500!) feet in the air. Now she’d give anything to hear the sound of a real person on the other end of her phone.
Director: Morag Shepherd
Actor: Kallie Filanda
Sound Designer: Jennifer Jackson

Jenifer Nii’s INFLUENCER
An influencer gets more than she bargains for when she uncovers the secrets of a mysterious group living on the outskirts of town.
Director: Alexandra Harbold
Actor: Isabella Reeder
Sound Designer: Joe Killian

Click on the image below to download our free app and listen to all four episodes under the Radio tab. You’ll also find a bonus episode, created in isolation by Rowland Hall-St. Mark’s students in grades 7-8 using our downloadable “How To” Guide. A Little Something Extra From Our Friends!

Utah Division of Arts & Museums commissioned three local artists who are also members of the Plan-B family – Tyson Baker and Latoya Cameron (aka Pop-Up Puppet Theater) and Lily Hye Soo Dixon (aka Ms. Dixon at Park City Day School) – to create these theatre-based activities that connect to our “Playwriting With Young People” curriculum, which fun and easy for students to do at home and suitable for the classroom.

Be sure to read the video descriptions before playing the videos.