Purchase Tickets or a Mini Subscription

Josie, Ann and Elizabeth Bassett  lived during a pivotal point in Utah/American history.  It was the Wild West: Gold Rushes and Butch Cassidy and the deepening of Mormon Country. THE AUDACITY is a play about women who had, well, the audacity to fight for themselves – in, and at times against, a culture of patriarchy.

Wait. Is that then or now?

Playwright Jenifer Nii proudly calls Plan-B her creative home. She has previously premiered seven plays with the company: THE WEIRD PLAY, one of 10 recipients nationwide of the inaugural Writers Alliance Grant from the Dramatists Guild Foundation; KINGDOM OF HEAVEN, the first original musical in the company’s history, created with composer and co-lyricist David Evanoff; THE SCARLET LETTER and SUFFRAGE, which garnered back-to-back nominations for the American Theatre Critics Association/Steinberg Award for Best New American Play Produced Outside New York; RUFF!, which was the company’s fourth annual Free Elementary School Tour; WALLACE, co-written with playwright Debora Threedy; and (IN)DIVISIBLE, a collaboration with 11 other local playwrights. Jenifer is the first Asian American to receive a world premiere in Utah. When not writing, she has spent time as a dog trainer, newspaper reporter, and competitive classical pianist. She is a member of the Dramatists Guild. 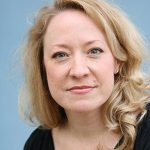 Costume Designer K.L. Alberts is happy to be working with Plan-B again this season, where he has previously designed ODA MIGHT, AN EVENING WITH TWO AWFUL MEN and THE ICE FRONT. For the past 32 seasons he has worked with Pioneer Theatre Company, where he has designed a wide range of shows. Several favorites include THE PLAY THAT GOES WRONG, LES MISERABLES (regional premiere) and THE CURIOUS INCIDENT OF THE DOG IN THE NIGHTTIME. For the Utah Shakespeare Festival K.L. has designed JOSEPH. AND THE AMAZING TECHNICOLOR DREAMCOAT, BIG RIVER and AH! WILDERNESS, among others.

Sound Designer Cheryl Ann Cluff co-founded Plan-B in 1991 and has served as Managing Director since 1995. She has designed sound for nearly every Plan-B production since 2000 and directed all 14 episodes of RADIO HOUR. Recent credits include directing and sound designi for Elaine Jarvik’s AN EVENING WITH TWO AWFUL MEN, Camille Washington’s ODA MIGHT, Matthew Ivan Bennett’s RADIO HOUR EPISODE 14: CIRCLE and, most recently Jenny Kokai’s SINGING TO THE BRINE SHRIMP (sound design).

Lighting Designer Jaron Hermansen returns to Plan-B, where he previously designed THE WEIRD PLAY. He is the resident Lighting designer for the Cape Playhouse, where his credits include LITTLE SHOW OF HORRORS, CLUE, ALTAR BOYZ and STEEL MAGNOLIAS. He designs for many local companies, as well as companies across the nation. Jaron sits on the board of the Intermountain Desert section of USITT, the association for entertainment professionals, and is a nominee for its Rising Star Award.

Scenic Designer Cara Pomeroy returns to Plan-B, where she has previously designed …OF COLOR and JUMP. Other recent designs include HIR for Salt Lake Acting Company, and FIRST DATE for the Grand Theatre. She is a graduate from the University of Utah Theatre department where she earned a BA in Theatre Studies with a focus on Scenic Design. Cara is the Technical Director and Technical Theatre teacher at the Salt Lake School for the Performing Arts and an adjunct professor of Stagecraft and Scenic Painting at Westminster College.

Director Jerry Rapier^ has been Plan-B’s Artistic Director since 2000. Four of the more than 30 productions he has directed for the company have been collaborations with Jenifer Nii: WALLACE, RUFF!, KINGDOM OF HEAVEN and (IN)DIVISIBLE. He has also worked on new plays with Pioneer Theatre Company, Salt Lake Acting Company and Utah Shakespeare Festival. Oﬀ-Broadway: Carol Lynn Pearson’s FACING EAST. Jerry is a recipient of Salt Lake City’s Mayor’s Artist Award in the Performing Arts.

Properties Designer Arika Schockmel has worked extensively in props and costume crafts for theatre, television and film. For Plan-B, her designs include SINGING TO THE BRINE SHRIMP, THE WEIRD PLAY, THE ICE FRONT and CHRISTMAS WITH MISFITS (props) and ZOMBIE THOUGHTS and FLORA MEETS A BEE (costumes). She is the resident Prop Master for the University of Utah’s Department of Theatre and a proud member of S.P.A.M., the Society of Prop Artisan Managers. For Keefer and Charlotte, for keeping my life together.