Over our 15-year relationship with playwright Matthew Ivan Bennett, we’ve had a lot of fun with radio drama, revisited Utah’s complicity in the Japanese internment through BLOCK 8, explored the art and life of Leonardo da Vinci in DI ESPERIENZA, opened our hearts to the impact of terminal cancer in MESA VERDE, explored the transition from female to male in ERIC(A), and tried to make sense of the loss of a child in A/VERSION OF EVENTS.

Matt’s plays invite us to re-examine the things we think we know and feel. And that has never been more true than with his latest play, ART & CLASS, receiving its world premiere as an audio drama April 15-25. Click here for details and Pay What You Can tickets.

The play takes inspiration from a real-life incident. In 2017, a parent in Cache County accused middle school art teacher Mateo Rueda of showing pornography to students. According to Cache County attorneys, the pictures—reproductions of classics collected in a box of postcards called The Art Box, which Rueda pulled from a shelf in the school library—were not pornography. Rueda let sixth graders students browse through The Art Box. Some of the pictures contained nudity. Rueda lost his job.

Whatever the case, one parent called the police. The police searched the school for pornography and instead caught the principal in the act of shredding images from The Art Box at the request of the school district. 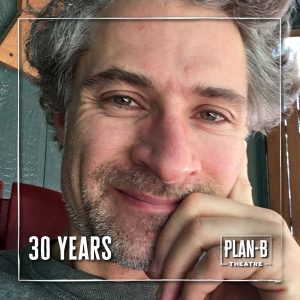 From the last paragraph, you might gather that I wrote a play blasting the majority culture of Utah. I did not, because I have learned that big problems only shrink in big hearts. With ART & CLASS, I’ve tried to stand up for teachers and expose racism, but not condemn anyone in the process. The teacher in my play is not a saint. My antagonists are not one-dimensional prudes, but renderings of people I grew up with and greatly respect. I could have written a diagnosis of social ills, but I thought the truth—as close as I can get —would be far more useful. Plan-B’s mission is developing socially conscious theatre. To be conscious, you must be honest.

The real-life art teacher was a man, but the story of his firing came to me in the wake of the #MeToo movement and many conversations with my wife Wendy—who is an educator—about the disparity in treatment between male and female teachers.

The teaching profession in Utah is made up of mostly women, but somehow preferential treatment is frequently given to men in starting salaries, workload, and HR problems. In the months before I began working on ART & CLASS, my wife was upset about male teachers who had misbehaved but were not immediately fired or reprimanded. They were accorded a benefit of the doubt, she felt, that would not be accorded to women. I wanted to capture that dynamic in my play, so I chose to write the teacher as a woman named Lucia and her principal as a man named Leland (the reverse of the real-life situation).

I have been fortunate to workshop ART & CLASS at four different theatre companies over the past two years: The Constructivists in Milwaukee, Plan-B Theatre in Salt Lake, Pioneer Theatre Company in Salt Lake, and Great Plains Theatre Conference in Omaha. At each stage, I learned something valuable from the artists supporting me. In Milwaukee, I learned that the role of Lucía would appeal more to actors if she were much more vulnerable. I also learned that Mindy, the parent character, was perhaps too sympathetic for someone who causes a person to lose a job. At Plan-B, I became tantalized by the possibility of a more personal, non-romantic relationship between Lucia and Leland. At Pioneer, I had the opportunity to spend a lot of time with the beats of the Mindy/Lucía (mother vs. teacher) scene and, at least, realized how to score it properly. From Great Plains I learned that the romantic subplot of the play, between Lucia and her husband Riley, could be better integrated with the broader themes—and that Riley had, perhaps, too many “debits” and not enough “credits” in the ledger of his character. Digging so deeply into character and relationship with ART & CLASS, with the artists from all these companies, was easily the most rewarding professional experience I’ve ever had. I feel more prepared than ever to move into production.

Click here for details on and Pay What You Can tickets to ART & CLASS, audio streaming April 15-25.